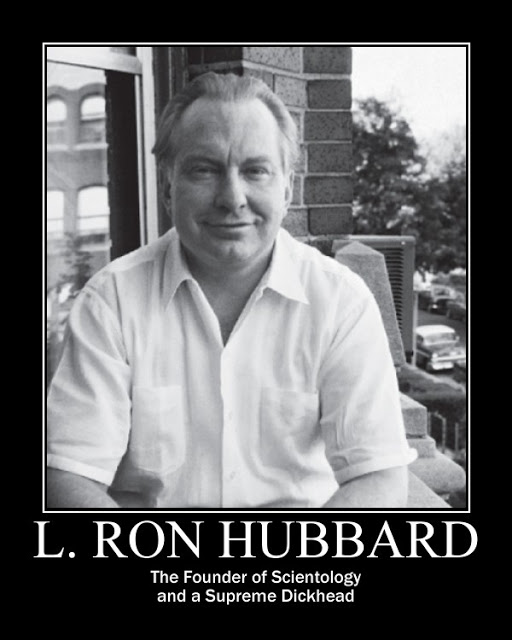 In Objectivism an axiom is a statement that defines the base of knowledge and is a self evident truth. The three axioms of Objectivism are that Existence Exists, that Existence is Identity, and that Consciousness is Identification.  The axioms of Objectivism flatly contradict Scientology in holding that the Universe existed prior to the evolution of consciousness.  That things are what they are regardless of what one chooses to believe.  And that to be conscious is to see things are they truly are without regard to the claims by an self-proclaimed authority figure.   An Objectivist would clearly see that L. Ron Hubbard was putting out complete nonsense and therefore would be classed as a Suppressive Person in the doctrine of Scientology.  Because it's a deliberate body of falsehoods created by a con artist Scientology must hold that the act of identification, which is to see things as they truly are as something that must be forbidden and punished.  And in a world ruled by Scientologists the truly conscious must be be put down with lethal effect.

Scientology will eventually become extinct.  L. Ron Hubbard didn't design Scientology to outlast him.  L. Ron Hubbard was wrong about a lot of things.  My first paying job in the private sector was a part time gig at two candy shops in downtown Minneapolis.  Both candy shops had picture windows, Hubbard's method of cleaning windows was NEVER used.

The false prophet L. Ron Hubbard was a piece of excrement (yes, I know I'm insulting excrement) that took advantage of the First Amendment of our Constitution.

I made a proposal on this blog to amend The Constitution:

All religions which deny the validity of the Constitution shall not claim protection under it.  The Congress shall have power to enforce this article by appropriate legislation.

The obvious question that's been raised in the past is why I don't call for a ban on Scientology by name?  A name is only a mental label for the concept.  Even though it appears to be internally forbidden to change the doctrines of Scientology, the doctrines also commands the believer to deceive the victims where necessary.   Thus deception, such as a name change, by a Scientologist will occur.  It's by identifying a specific toxic attribute of Scientology that we can properly exclude it from protection under the First Amendment.  A fundamental attribute of the doctrine of Scientology is the denial of real laws.  The real acts of legislation by real governments that protect the real rights of the people.  In declaring actual laws to be invalid Hubbard opened the door to the commission of a multitude of crimes that would be carried out by Hubbard and other Scientologists for their own personal benefit.  This action's absolutely intolerable in a civil society, in reality the people are the sovereign authority and the sole source of legislation.  In reality Scientology has to go.  In order for us to live a properly Human life we must allow our government to take a proactive role in defending our rights.

Although Scientology is a vexatious litigant and won many civil suits.  Scientology will eventually lose in the court of public opinion.