If your spine glows while you are having sexual intercourse you may be a Cylon.
Posted by Leslie Bates at 8:08 PM No comments:

I just posted the first chapter of my novel on my Live Journal page.

This is not set in the Official Traveller Universe.

http://otherles.livejournal.com/11664.html
Posted by Leslie Bates at 8:33 AM No comments:

Event Of The Day

A Literary Demolition Of DORSAI!

Or how not to write a science fiction novel.

As part of my project to write a science fiction novel I am re-reading DORSAI! Yes, the exclamation point is part of the title. This is the first novel in a series of ubermensch fantasies by Gordon R. Dickson. I am reading it with the intent of deconstructing it as an example of military science fiction with mercenaries. My goal as a novelist is to create a depiction of a similar band of mercenaries and show how a rational nation would be deal with them.

Here’s the first paragraph from the chapter titled MERCENARY III:

Returning again up the corridor toward the bow of the ship, Donal allowed himself to wonder, a little wistfully, about this incubus of his own strange difference from other people. He had thought to leave it behind with his cadet uniform. Instead, it seemed, it continued to ride with him, still perched on his shoulders. Always it had been this way. What seemed so plain, and simple and straightforward to himself, had always struck others as veiled, tortuous, and involved. Always he had been like a stranger passing trough a town, the ways of whose people were different, and who looked on him with a lack of understanding amounting to suspicion. Their language failed on the doorstep of his motives and could not enter the lonely mansion of his mind. They said “enemy” and “friend”; they said “strong” and “weak”–“them” and “us”. They set up a thousand arbitrary classifications and distinctions which he could not comprehend, convinced as he was that all people were only people–and there was very little to choose between them. Only, you dealt with them as individuals, one by one; and always remembering to be patient. And if you did this successfully, then the larger, group things came out right.

Can you understand that? Was Dickson an English Literature major at the U of M?

ASTOUNDING SCIENCE FICTION, the periodical that published this serially in 1959 did pay a penny a word. But this amount of barely incomprehensible verbiage is simply absurd.

Dickson attempts to recreate the European political environment prior to the Treaty Of Westphalia (1648), a time when the use of specifically raised and organized mercenary units was commonplace. Civil wars within what should be sovereign nation states are commonplace. Dickson also creates a moral nightmare. A universe where the Right Of Life is legally negated. An individual may be conscripted by the state and forced to work on another world in trade for another worker with knowledge in another field. Or die as cannon fodder in a foreign war. And the penalty for an individual who broke this so-called contract is death.

Dickson may not have understood the concept of government. But then he was a graduate of the University Of Minnesota.

What is very apparent when reading this and the other works in the series is that Dickson adopted a Platonist metaphysics. What passes for philosophy is a gibberish of Eastern Mysticism and Racial Collectivism along with the open practice of magic. In fact the overall plot of the series, such it was, is completely dependent on the occurrence of magical events. It would more accurate to describe this series as a work of fantasy instead of science fiction. In THE FINAL ENCYCLOPEDIA, Dickson actually wrote a scene set on the Platonic World Of Forms. And at the end of the initial novel Dickson has his protagonist literally commanding the antagonist to suffer. And the antagonist magically does so.

If reality is unreal in a fictional universe, why bother to write about it?

Posted by Leslie Bates at 7:24 PM No comments:

Incident Of The day

According to the Winnipeg Free Press:

Of course, the environmentalist wackos will blame this on global warming.

Dashcam video of meteor. Russian disco sucks.
Posted by Leslie Bates at 1:24 AM No comments:

The plot line I'm thinking of using in the novel combines elements of the films BLADERUNNER and MY FAIR LADY.

As part of my project to write a military science fiction novel I'm rereading Dorsai(!) by Gordon R. Dickson. Quite frankly I'm astounded as to how this piece of literary excrement was ever published. But I will finish reading it because I'm basing some of the bad guys on the Dorsai mercenaries.
Posted by Leslie Bates at 8:10 PM No comments:

Nuclear Test Of The Day

Apparently there is such a place as the Nuclear Test Road in North Korea. 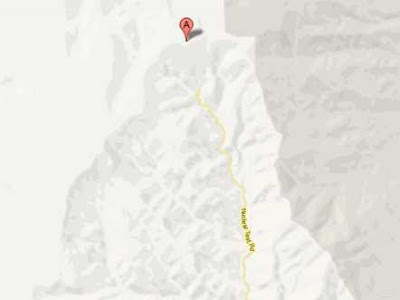 Nice piece of 1945 technology you got there Mr. Kim.
Posted by Leslie Bates at 12:49 AM No comments:

Although at the age of 85 he's a bit too old to go out and party.

Posted by Leslie Bates at 7:50 AM No comments:

Email ThisBlogThis!Share to TwitterShare to FacebookShare to Pinterest
Labels: Barack Obama should retire

Where is a lynch mob when you really need one?

There is a serious philosophical question that I really need to think about. I'll get back to you folks later.


What is the purpose of religious tolerance?

Under Islam man is the property of the deity. A person has no rights, cannot enact legislation, and cannot establish and uphold a moral standard. Compliance with Islam must be imposed by force. Furthermore a Muslim is permitted to deceive or otherwise use non-believers for their own gain and even commit murder. An underage girl who is protected under a rational code of law is seen, literally, as a usable object under the doctrine of Islam.

Such behavior, which denies the rights and sovereignty of the individual, cannot be tolerated in a civil society.

Posted by Leslie Bates at 8:51 AM No comments:

Email ThisBlogThis!Share to TwitterShare to FacebookShare to Pinterest
Labels: Islam is Rape

This is not a review. This is simply a comment.

Before I entered high school I read STARSHIP TROOPERS by Robert A. Heinlein. In this work, which was written in response to pacifist agitation, Heinlein explains how a military organization should function and more importantly, why it should act this way. Heinlein also explains what he believes the obligations of citizenship are.

I was mentally blown away.

When I was in high school I read THE FOREVER WAR by Joe Haldeman. It was an anti-war novel written by a veteran of ground combat in the Vietnam War. It was written in part as a response to STARSHIP TROOPERS. This work was a virtual step by step manual on how not to run a society and fight a war.

First, shoot first and don't ask any questions of anyone. The war began with the assumption that the loss of a colony ship was due to a recently encountered alien race. No attempt to communicate with the aliens is made. The first group of aliens encountered is simply killed as if the troopers were back in Vietnam. Later on we are told that the aliens are a group mind that is a priori incapable of communicating with an individual mind. It is only when a Terran group mind is created that communication became possible. I suppose that someone could drive a Nimitz class aircraft carrier through this plot hole.

Second, don't ask for volunteers. Conscript the best and the brightest, no one can refuse the draft. And because the troopers lives belong to the collective they cannot withhold consent to sexual contact. Gang rape of women in the mixed gender units is shown to be the norm.

Third, collectivism is the future. Social engineering in practiced to the point that a collective mind is created. Communication, and thus peace, with the aliens becomes possible.

I was not positively impressed by this novel.
Posted by Leslie Bates at 11:26 PM No comments:

On Wednesday a waitress at a St. Louis area Applebee's restaurant was stiffed by the pastor of a church on the Illinois side of Mississippi River. The waitress posted an image of what the stiffer wrote on the bill: 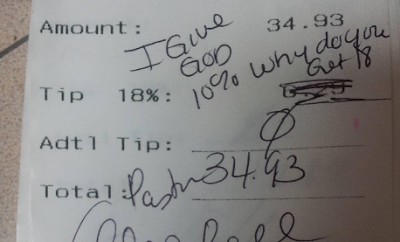 On Wednesday I started to write a rant on the subject for my blog but I was not happy with the text and decided that more thought on the subject was necessary. Here's what I wrote:

When I was a delivery driver for Pizza Hut I used to dread orders from hardcore Democrats and union members, a status usually indicated by a sign on the front lawn of a sticker on the front door. These people would never tip. The worst case of abuse I experienced was from an African-American man wearing a t-shirt with the image of Martin Luther King, Jr. in the place of Che Guevara, I waited standing in a cold thundershower while this person counted out the exact amount of the transaction down to the penny with no tip added. And I had to stand there like a good delivery driver and smile. Why does this clearly abusive behavior occur? The theory I held at the time was that the person believed that their ideological status exempted them from treating working people decently.

To put it another way it appeared that the illusion of moral supremacy allowed these people to behave in an apparently despicable manner.

As of Friday the waitress was fired for violating corporate policy.
Posted by Leslie Bates at 12:46 PM 7 comments:

Why should the piper lead us to reason?
Posted by Leslie Bates at 9:02 AM No comments: