The Admiral at the Anti-Strib wrote:

Then, along comes McClatchy. Even the socialists get deported and the communists take over. They bought the Strib for about 1 billion, and in true liberal fashion, ruined it, lost lots of money and readers, and when they sold, they got roughly half of what they paid. (Now you know why I do not trust liberals with the economy).

Back when The Star was a separate afternoon paper I used to deliver it after school. The odd thing is that The Star was actually founded as the local Socialist Party rag.
_

Anti-Strib: Strib circulation drops 7%
_
Posted by Leslie Bates at 5:21 AM No comments:

The best example of what happens when you criminalize political opposition is the Roman Civil War.

Gauis Julius Caesar was a republican to the core. He believed in the Roman Republic, and its unwritten constitution. When his political opponents, the Optimates, made it clear that they were going to prosecute him and either exile or execute him, the moment Caesar set down his military command they made war inevitable. Especially since it was clear that they were not interested in following the law, except at their convenience.

Caesar was not given a choice between going to war and destroying the republic or preserving it by going quietly to his doom. He could see that the republic was doomed no matter what his choice was. He could either start a civil war or let Rome slide into a tyranny run by the Optimates. Given that choice, let the dice fly and hope you can put the pieces back together after you win. At least, you can die trying.

The Democrats remind me of the Optimates in many ways. William Clinton seems like a 21st century version of Pompey Magnus. That Bush has not played Caesar is a tribute to two things: George W.'s fundamental decency, and the fact that the United States is yet not in as bad a shape politically as the late Roman Republic.

Of course being a "progressive" means never having to pay attention to the lessons of Human History.

Unfortunately President George W. Bush is being a good Christian gentleman is a era that is dominated by those who seek to live and rule by the sword. This is not going to end well.

What are your questions on this block of instruction?
_
Posted by Leslie Bates at 10:12 PM 1 comment:

Democrats seem to be drifting toward the concept of prosecution of former office holders by criminalizing policy differences. That's a certain formula for civil war; perhaps not immediate, but inevitable. The absolute minimum requirement for democratic government is that the loser be willing to lose the election: that losing an election is not the loss of everything that matters. As soon as that assurance is gone, playing by the rules makes no sense at all.

Yes I do think that the Donks are stupid enough to try something like that.

I cannot repeat and emphasized this enough: to the totalitarian POWER IS LIFE.

Any threat to their power must be neutralized by any means necessary.

Are there any questions on this block of instruction?
_
Posted by Leslie Bates at 10:10 PM 1 comment:

There's been another bridge closing here in Minnesota.

Update—after an especially warm spring day, MN-DOT inspectors discovered that one set of bridge bearings had once again reached its stop bracket. The stop bracket limits how far the bearing can slide, and it prevents the bridge from sliding off of the pier and falling into the water. Once the span hit the stop bracket, forces from the heating and cooling of the span apparently pushed the problem pier two inches further out of plumb. It also caused some bolts on the structure to shear off. As a result, MN-DOT closed the bridge at 10AM on Friday, April 25, 2008.

The 2008 legislative session pushed though a highway bonding bill. The Lowry Bridge replacement is one of the high priority projects. The bridge is expected to be started in 2009 and be completed by the end of 2010. The plan is to install a signature span. Finalists include a towering arch design, a single tower cable stayed bridge, and a more routine concrete box bridge.

I drove over this bridge on Wednesday afternoon.

Unfortunately it looks like our glorious state legislature (dominated by the Donks) will once again blow money on aesthetics over function. Bigger kickbacks I suppose.
_
Posted by Leslie Bates at 12:06 AM 2 comments:

I celebrated "Deify the Earth because it can't tell the power tripping totalitarian trash to fuck off day" by getting in my car and going for a nice leisurely drive to nowhere in particular.
_
Posted by Leslie Bates at 11:58 PM No comments:

Barack Obama is the embodiment of everything that is wrong with the Democratic Party, apart from Hillary Clinton.

We now return you to your regularly scheduled reality.
_
Posted by Leslie Bates at 5:28 PM 1 comment:

Here is about a thousand words on why I will never vote for a member of the Democratic Party. 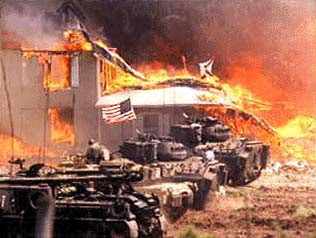 Here is an interesting website on the Massacre of the Branch Davidians.

Fifteen years ago a small community in Texas was attacked by two packs of predatory animals.

The first pack was a federal agency whose functions were in part a deliberate and explicit violation of the charter and supreme law under which the Federal Government was established.

Even under regulations in effect at the time, the BATF could have sent a couple of agents in coats and ties in a plain government issue sedan to the Branch Davidian residence and asked the federally licenced firearms dealer living there to open his place of business and records to examination. Or if they needed to place the leader of the congregation under arrest they could have taken him into custody while he was out on his morning run. Given Mr. Koresh’s past history of cooperation with local law enforcement they could have simply asked him to come down to the local sheriff’s station.

The BATF did none of the above.

Instead the BATF attempted to stage a military-style assault, code-named Operation Showtime, in order to impart a positive impression of the agency upon the socialist filth that had just moved into the White House. Never mind all the innocent women and children who could have been maimed or killed during the raid.

After the BATF goons were driven off another pack of predators, the so-called Hostage Rescue Team of the FBI, descended upon the Branch Davidians.

If it had been necessary to take the Branch Davidian residence by force a trainee platoon from the Benning School for Boys could, in accordance to their training, have entered the building and taken down any armed individuals without deliberately harming the non-combatants. Instead, the HRT, the alleged experts in hostage rescue, proceeded to terrorize the people within the residence. And when the Branch Davidians refused to surrender, they were exterminated by the HRT.

The HRT used some armored vehicles to destroy the exits from the building and to allow the ambient wind to blow through the structure while other armored vehicles injected CS gas, known to be inflammable and toxic to children and elderly persons, into the wooden structure.

And then the HRT fired incendiary devices into the building.

While the Branch Davidian residence burned to the ground on live television, HRT gunmen stationed behind the building out of sight of the TV cameras shot anyone who attempted to escape the fire from the rear of the building.

The Democrat majority in both houses of Congress were not the slightest bit appalled by the atrocity, instead of condemning the president for his actions and initiating the process of impeaching and removing President Clinton, they chose instead to condemn the victims and those who dared to speak up for them.

Given the choice of obeying the supreme law or violating the law, they chose to violate the law.

President Clinton and the Democratic Party could have obeyed the Constitution, the Supreme Law to which the President, the Congress, and the Federal Government in general were subject and stopped the terrorization and murder of the Branch Davidians, but instead chose to violate the Supreme Law.

And like a number of illiterate barbarian chieftains before him, President Clinton and his party used the murder of the Branch Davidians to demonstrate to the rest of us what would happen to anyone who refused to submit to their will. Instead of standing up for the rights and lives of Americans they chose instead to terrorize and murder Americans.

And if you think that attitude and ideology is uniquely Clintonistic I will you disabuse you of that notion:

"Conformity will be the only virtue and any man who refuses to conform will have to pay the penalty."

Since then the name “democrat” has become in my mind synonymous with the concept of “murderer.” If there is one complaint I have about President Bush it is that he has done nothing to bring the perpetrators of this atrocity to justice.

Mister President, we are still waiting for justice. 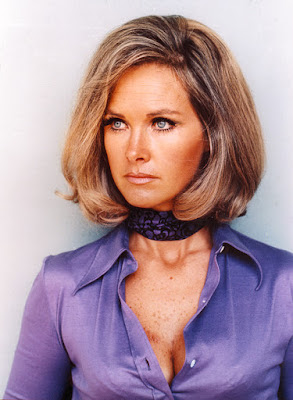 I'm still waiting for that bright and shiny future.
_
Posted by Leslie Bates at 11:34 PM No comments:

Charles, a fellow charter member of the North Texas Movie Depreciation Center, was in town for some family business. Well everything settled he gave me a call and asked if it was ok to swing on by, maybe catch a movie. I've got a very good selection of flicks, both good and bad, and he asks to pop one one.

Rick Astley ain't got nothing on Ed Wood.

Also, in the early morning hours of this day in 1865 President Abraham Lincoln died after being shot by actor John Wilkes Booth. The relationship between the Thespian Community and the Republican Party remains sour to this day.

We now return you to your regularly scheduled reality.
_
Posted by Leslie Bates at 11:58 PM No comments:

Relations between the Republican Party and the Thespian Community have not yet recovered.
_
Posted by Leslie Bates at 8:29 AM No comments:

What Cylon Model are You?

You are a Raider Model
Take this quiz!

| Make A Quiz | More Quizzes | Grab Code
Posted by Leslie Bates at 9:41 AM No comments:

Took a friend to the last showing of the Rocky Horror Picture Show at the Riverview Theater. Had fun.

Amongst the rules for being an Evil Overlord is number 75: I will instruct my Legions of Terror to attack the hero en masse, instead of standing around waiting while members break off and attack one or two at a time.

And part four of Legacy is up on My Own Private Universe.

We now return you to your regularly scheduled reality.
_
Posted by Leslie Bates at 11:02 PM No comments: