Morons of the Day

Some local leftists, basically a bunch of apparent communists and union trash, are having a public hissy fit over the fact that the cleaning crew at a locally headquartered grocery store chain, Cub Foods, are only paid the minimum wage.

Faced with higher prices the customers as a general rule will shop elsewhere. Faced with a reduction or outright elimination of a return on their investment the stockholder will invest elsewhere as well.

In the real world real workers who do real work who don't like what they are being paid will look for a better paying job from another employer. I've done this a few times myself. And believe me this strategy works.

But instead of dealing with other people on the basis of consent the campus commies, union goons, and other such trash prefer to use coercion as their means of obtaining their goals. But in this case the government will not act as their goon squad so they are attempting to inflict a guilt trip on their target by means of a hunger strike.

It doesn't bother me in the slightest to say that anyone dumb enough to try this on me is totally welcome to starve to death.

But just to be nice I'll suggest a more efficient and less painful way of committing suicide, as illustrated by this panel from an episode of Something Positive:

(Thanks to Randy Milholland.)
Posted by Leslie Bates at 5:32 PM 1 comment:

How many Muslims does it take to change a light bulb?

They don't. They blame the Jews for the darkness.
_
Posted by Leslie Bates at 2:08 AM No comments:

If you had a daughter, who would you rather have her marry? 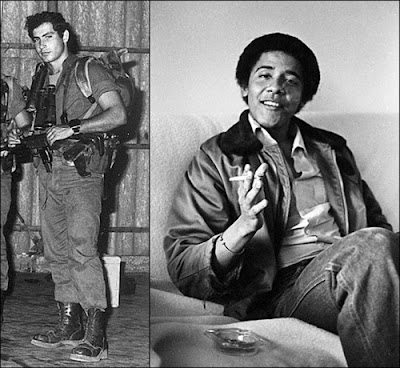 What we have here is an image of Bibi Netanyahu and Barack Obama at the same age. There's a reason that some fathers have shotguns. (I'll stick to my FAL for that job.) 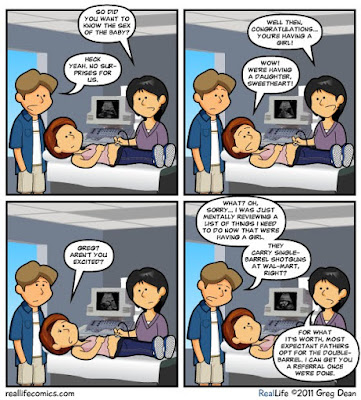 Everything I need to know about unions, I learned during the 1983 copper miners’ strike in Arizona, when a 3-year-old girl was shot in the head while lying in bed with her teddy bear. All because her father was a strikebreaker.

I'm not a Christian, but I do believe that those who live by the sword, should as Christ says, die by the sword.

I believe that those who benefit from the exercise of coercive force should be put down by force.

What are your questions on this block of instruction?
_
Posted by Leslie Bates at 1:51 AM No comments:

As far as I'm concerned, Bill Maher is on my "cry wolf" list.

That walking waste of mass and energy has no credibility whatsoever.

What are your questions on this block of instruction?
_
Posted by Leslie Bates at 2:15 PM No comments:

This isn't disturbing but it is a bit annoying.

(Illo from Dork Tower by John Kovalic)
Posted by Leslie Bates at 1:14 AM No comments:

Email ThisBlogThis!Share to TwitterShare to FacebookShare to Pinterest
Labels: dork tower, douglas adams, hitchhikers guide to the galaxy, so on and so forth

Video of the Day

Seriously, this is a clear case where the live version is superior to the album version. I really did not care for the in studio ornamentation in the original release.

Found at Legal Insurrection.
_
Posted by Leslie Bates at 12:58 AM No comments:

... at the total perspective vortex:

Even if the usual Marxist credibility issues did not apply to a recent announcement from the White House, we need to remember that there are still millions of folks out there who still believe that they have the Allah (not God) given right to murder those who have chosen to live a rational life. Some of them still have money and organizational skills to apply to the problem of murdering infidels like you and me.

Islamic terrorism will continue. Count on it.

What are your questions on this block of instruction?
_

David Horowitz has this to say about the event:

Osama bin Laden was a symbol of the Islamic jihad. After 9/11, surveys by al-Jazeera and other sources indicated that between 10% and 50% of Muslims regarded him as a hero. That is somewhere between 150 million and 750 million people. Symbols are important, and the death of the symbol of Islamic jihad is important. But the jihad will go on.

The fact that bin Laden was killed in a mansion near Islamabad (fitting name) is but one mark of the support he had in the Muslim world. But by the time our forces reached him, ten years after 9/11, the center of the jihad had long passed from the caves of Waziristan to the Middle East — to the Islamic Republic of Iran, to Hezbollah in Lebanon and Hamas in Gaza, and to the fount of the Islamic hatred and crusade against the West — the Muslim Brotherhood in Egypt.

Obama will take credit for the death of al-Qaeda’s leader, and he deserves it — for the aggressive war he waged in Pakistan in particular. This was a forward strategy that provoked the wrath of the “liberal” establishment when Nixon tried it in Vietnam, and Reagan in Libya and Bush in Iraq. Unfortunately, this is only the right hand of Obama’s strategy towards the jihad. The left hand is simultaneously stoking the fires of Islamic aggression in its heartland, the Middle East, and our war with this evil is just beginning.

In his speech tonight the President talked as though the war is a war with al-Qaeda, although al-Qaeda has played a very small and diminishing role in the 17,000 plus Islamic terrorist attacks that have been perpetrated since 9/11. After that attack, Bush swore that the United States would not tolerate terrorist regimes that threatened the democracies of the West. You’re either for us or against us he said, to the dismay of the appeasement Left. But since then Islamic terrorist regimes have been created in Lebanon and Gaza and Somalia, the Taliban has been resurgent in Pakistan and the Muslim Brotherhood has risen in Egypt. The storm clouds that are gathering — not least because of the feckless ineptitude of the Obama Administration itself — will not be dispelled by one man’s death.

There are many days of grief and suffering on the horizon still. As President Bush so rightly said in the days after 9/11, this will be a long hard war that is likely to last our lifetimes.

Any questions?
_
Posted by Leslie Bates at 5:25 AM No comments:

Here in Minneapolis there are still piles of plowed up and compacted snow, which are not protected by shade, still visible from the streets and highways. And yesterday, on the First of May, I saw snowflakes falling while I was parked at a cab stand.

What ever happened to Global Warming?
_
Posted by Leslie Bates at 4:46 AM No comments:

Today is May First, on this day we should take some time to remember the victims of Communism.