It is more a subject of joy that we have so few of the desperate characters which compose modern regular armies. But it proves more forcibly the necessity of obliging every citizen to be a soldier; this was the case with the Greeks and the Romans, and must be that of every free State. Where this is no oppression, there will be no pauper hirelings. We must train and classify the whole of our male citizens, an make military instruction a regular part of collegiate education. We can never be safe till this is done.

Short of a revolution I simply don't see this happening.
_
Posted by Leslie Bates at 7:04 PM No comments:

"Freedom has many difficulties, and democracy is not perfect. But we have never had to build a wall to keep our people in."

Imagine how much fun the city of Chicago could be if they were able to put up a wall to keep the productive victims in... assuming of course they could get their overpaid municipal union workers employees to actually get up and build the thing.
_
Posted by Leslie Bates at 3:25 PM No comments:

A Bunch Of Quotes From The Other Les

"Gosh, his feelings must be real hurt when he found out that the average citizen has more functioning neurons than he does."

"Why does the Left insist on being anything but right?"

"Whenever I listen to a speech by or read the writings of a socialist, or whatever any other advocate of affirmative coercion chooses to call himself this week, it is with the reasonable expectation of being lied to."

"When fighting for one's life, one NEVER uses the Queensberry rules."

"Peace in the real world is simply the absence of those -- such as the socialists -- who seek to deprive you, I, and our fellow citizens of our own Life, Liberty, and Property. Real peace can only be achieved by the physical isolation or outright elimination of those who seek to subjugate, plunder and murder us. This can only be done through the use of physical force...In short, true peace can only be achieved only through the possession of superior firepower and the moral will to use it."

"Somewhere out there is about thirty feet of rope and a lampost with Charlie Shumer's name on them."

"Stupid and artificial is in my mind very repulsive."

"Of course when that "hippy chick" is portrayed by Charlotte Rampling, circa 1974, the affirmative choice is pretty much a given."

"A Bolo is what a Cylon wants to be when it grows up."

Motivational Poster of the Day 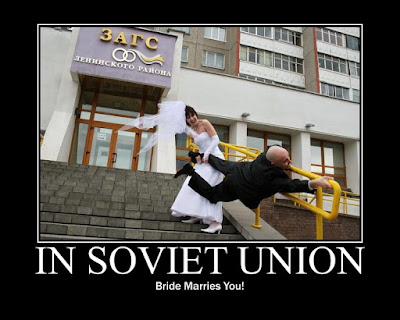