The American edition of the Daily Mail site is reporting that the Salt Lake City police have shot a sixteen year old boy who was carrying a broomstick.  Although the race of the boy hasn’t been identified the article does show several photos of police confronting angry black people.

Although it’s easy to jump to a particular conclusion I will point out the following:

The article did report that officers who were responding to an unrelated call came the teenager and his companion arguing with an adult man.  To a cop or civilian with this situation would appear to be a crime in progress.

The useless idiots who will come out to claim that the boy was unarmed.  But the fact is that a broomstick, with or without the head, can be used to inflict a blunt force trauma with deadly effect.  And though I have been paid to push a broom before my enlistment in the United States Army, I have never had occasion to carry a broomstick without the head.

Contrary to the noise generated by the racial collectivist trash known as Black Lives Matter* the rational thing to do is the say, “yes sir.” and gently put down the broomstick to defuse the situation.  To not do so is a Darwin Award level of stupid.**

* I’ve come to think of this lot as Die Swartzerstrumabteilung.

** Unless you’re a nice Jewish boy in Nazi Germany or a sane White guy on a college campus then the only option is to kill as many of the MF’s as possible.
Posted by Leslie Bates at 11:23 AM No comments:

Email ThisBlogThis!Share to TwitterShare to FacebookShare to Pinterest
Labels: And So On And So Forth, Black Lives Matter, Black Racism, National Socialism, Racial Collectivism, Stupid Criminal Tricks

When anyone is allowed to vote then anyone will vote.

--Some Retired Cab Driver
Posted by Leslie Bates at 4:04 AM No comments:

Email ThisBlogThis!Share to TwitterShare to FacebookShare to Pinterest
Labels: Democracy

Mark Urbin has provided us with this brain dropping:

Does this walking brain death case understand the difference between the acts of nomination and election?

Up until 1965 the Democrats were the party of corruption and Ku Klux Klan.  As a result most Blacks identified themselves politically as Republicans.

The Democrat occupying the White House, Lyndon Johnson, decided to co-opt the black population into voting for his party.  He and his fellow democrats in Congress used public funds for a set of programs called the Great  Society.  As a result he got his wish for the "N*****s" to vote Democrat.  There has also been five decades of indoctrination into hatred of Republicans in general and Whites in particular.

Given all this one may conclude that the twin in question mat also be a racial collectivist.  In that case I would suggest that  this twit follow the helpful examples provided by other racial collectivists in this You Tube video:

Posted by Leslie Bates at 3:46 PM No comments: 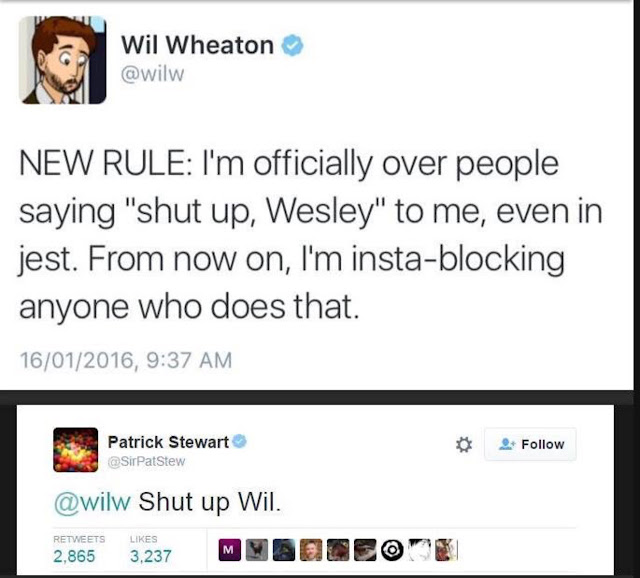 Posted by Leslie Bates at 2:58 PM No comments:

Existence is what we commonly call reality.

Live with it.
Posted by Leslie Bates at 7:21 AM No comments: 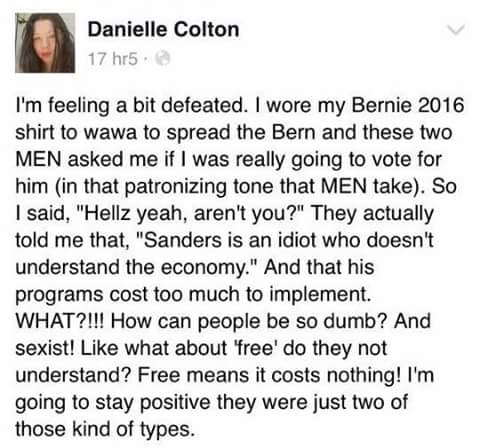 Seriously, I'll have to rethink my position on Metaphysics because there's no way these morons can get out of bed alive at whatever time of day without divine intervention.
Posted by Leslie Bates at 12:53 PM No comments:

Here's a message for all of those whiny overgrown children who need a safe space to protect them from real thoughts: 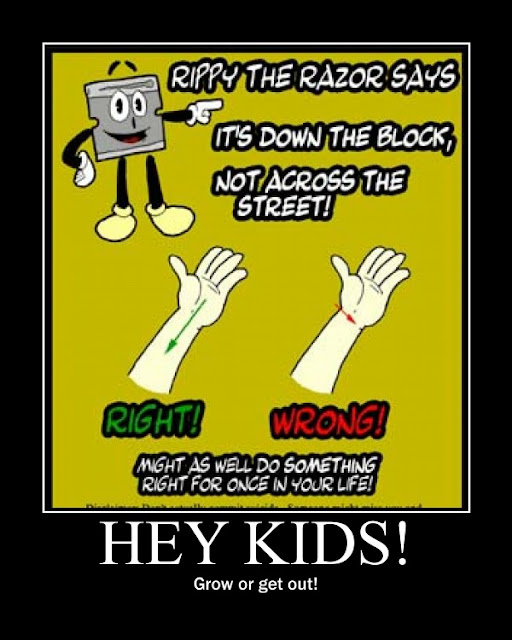 Seriously--GROW UP OR GET OUT!
Posted by Leslie Bates at 6:23 AM No comments:

Email ThisBlogThis!Share to TwitterShare to FacebookShare to Pinterest
Labels: Something Positive 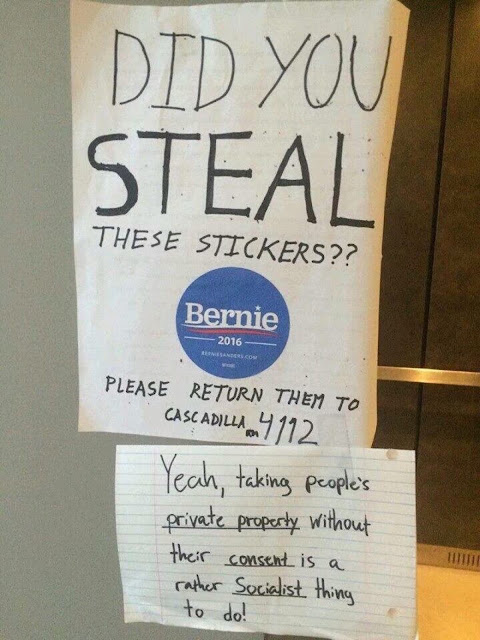 Tbanks to Mark Urbin.
Posted by Leslie Bates at 6:58 AM No comments:

Quotes Of The Day

Mark Urbin brought us this:

There are some people who make a big deal about me not having a “real job” until I was 40, but Karl Marx never worked a day in his life. If you have the right ideas, you shouldn’t have to work.

--ROBERT A. HEINLEIN, The Notebooks of Lazarus Long
Posted by Leslie Bates at 1:08 PM No comments: 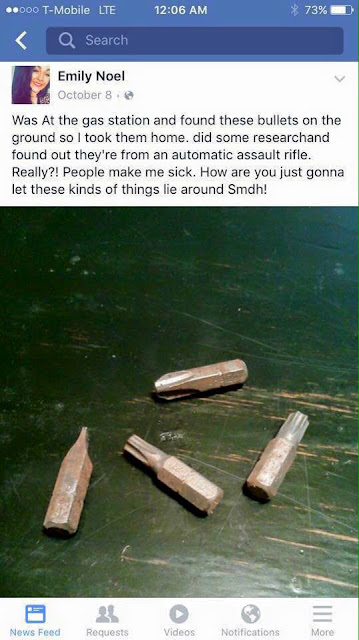 Now anyone who's lived in the real world knows these are part of a screwdriver derived tool system.  For someone to actually mistake these for expended rounds of ammunition is beyond belief.  But there are people who are that ignorant and they do vote.

Even if it kills me I will work to establish the Heinlein system as the government of the United States.

So what is the system Heinlein in his novel Starship Troopers?

While the citizenship course will not be mandatory, completion and a passing grade will be required to exercise the authority to vote.

Posted by Leslie Bates at 12:07 AM No comments:

In a sane world Barrack Obama would be hanged for treason, Hillary Clinton would be in prison for numerous felonies, Bernie Sanders would be confined to a mental hospital with a lifetime supply of happy pills, and finally Donald Trump would be the presidential candidate of the Jackass Party.
Posted by Leslie Bates at 1:47 AM No comments: 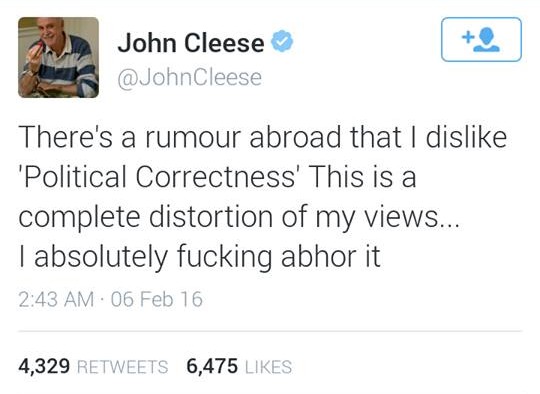 I could go on as to why I completely agree with Mr. Cleese but I have things to do.

And thanks to Mark Urbin for the image.
Posted by Leslie Bates at 11:04 AM No comments: 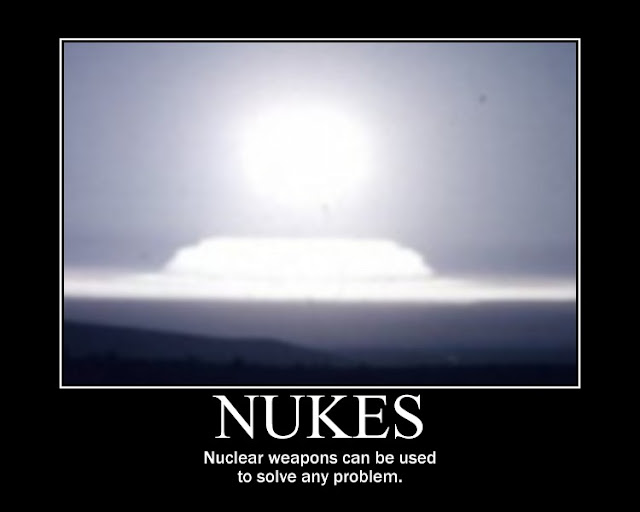 Posted by Leslie Bates at 7:20 PM No comments:

I’ll start with this image passed along by Mark Urbin: 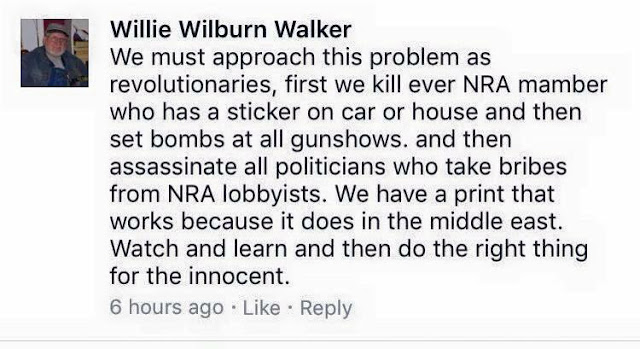 This is a call for the act of mass murder.  The fact is that some adherents of what was politely called gun control are in fact the heirs of Adolf Hitler and the National Socialist German Workers Party.  As a result it has become very-very-very-easy to predict what an advocate of public disarmament will say.  All one has to do is take any mouth dropping of Reichsminister Paul Joseph Goebbels and substitute the words Gun Owner for the word Jew.

After an earlier post where I condemned an advocate of public disarmament a British clergyman posted a response that denounced me for having an actual moral standard.

What is it like to not have a human soul?

What is like to be told that there is an evil that is orders of magnitude greater than the kidnapping and murder of one child, an evil that cannot be stopped by a locked door, an evil that can only be stopped by the exercise of deadly force against its perpetrators, and to declare that those who would act to defend themselves, their own families, and their own nation against such an evil are nothing more than vermin?

What is it like to declare that those who oppose the greater evil must be kidnapped and have their souls destroyed and every shred of conscience ripped away with drugs and electric torture?

What is it like to just be another fucking predatory animal?

I will say this right now--if this lot wants to renounce reason and act as National Socialists then let us treat them as such--hang them from the neck until dead.
Posted by Leslie Bates at 3:14 AM No comments:

I will begin with this image: 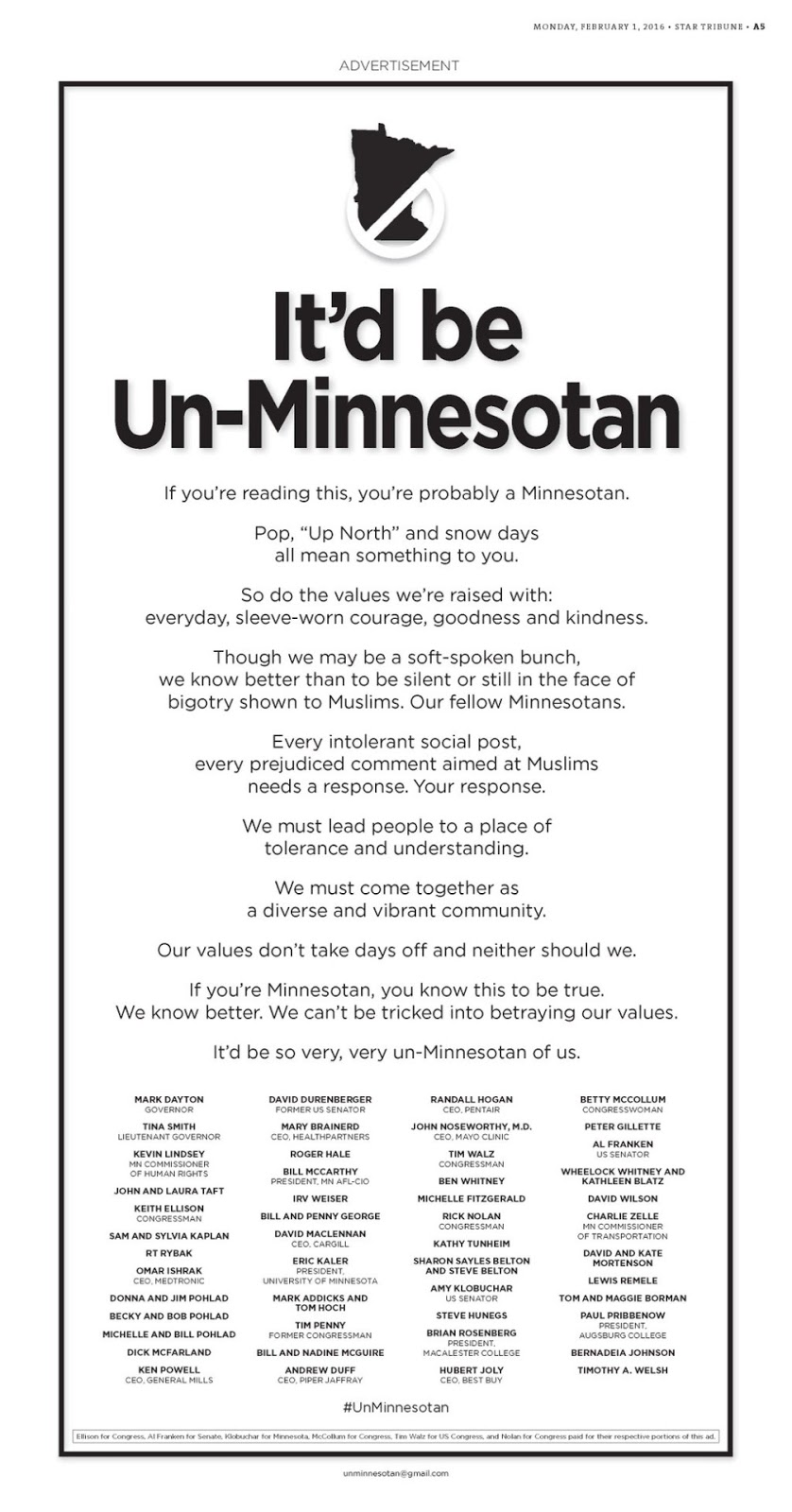 The false prophet Mohammed commanded his followers to commit the acts of rape, robbery, and murder.  The doctrine of Islam commands enslavement and the systematic violation of the rights of man and to act as predatory animals.  Without question the doctrine and practice of Islam is absolutely depraved.

Given that Human Life is the foundation of all valid moral values then Islam must be absolutely condemned.  But the signatories of this document condemn as immoral those who hold an actual moral standard.

I am hard pressed to respond to this utterly depraved document without the use of barracks language.  But I will say this, Vidkun Quisling was shot for his betrayal of the Norwegian people and we’re going to need an all night firing squad to deal with this bunch.
Posted by Leslie Bates at 1:40 AM No comments: 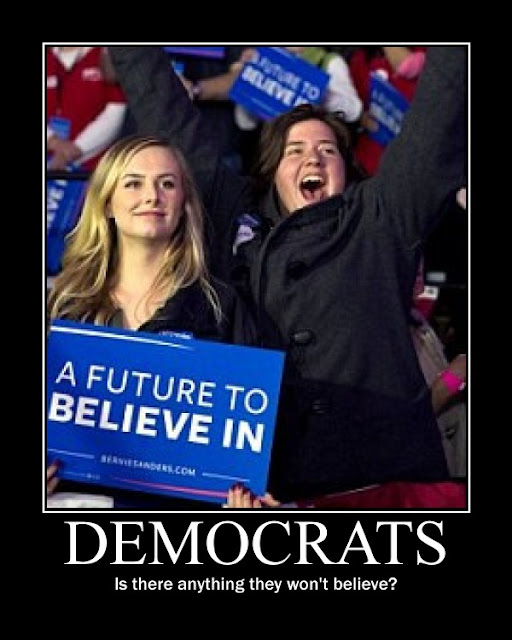 The good news is that Ted Cruz beat out that deal making whim worshiping Delta Hotel with silly hair Donald Trump in the Iowa caucus.  For the next election the Grumpy Old Party needs a serious and sane candidate and not a posturing buffoon.

The Delta Hotel should just go away.
Posted by Leslie Bates at 2:58 AM No comments: 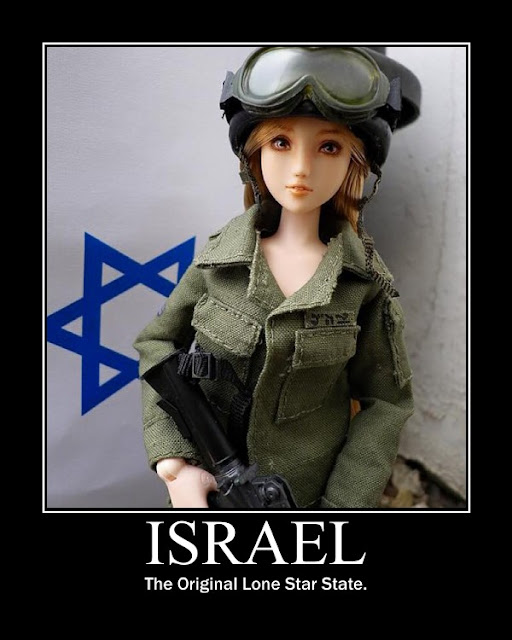 Thanks to Mark Urbin for the original image.
Posted by Leslie Bates at 3:05 AM 1 comment: