...the more they stay the same. 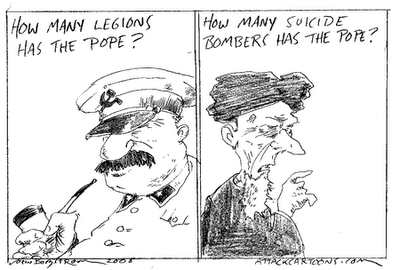 So what is the difference between a Christian Martyr and an Islamic Martyr?

Suicide bombers are a great means to slaughter helpless civilians but they are not a terribly effective means to deal with armed forces that were trained and kitted out to fight a world war.

And if those depraved idiots keep it up, they'll get a world war too.

We now return you to your regularly scheduled reality.
_
Posted by Leslie Bates at 8:54 AM