I will begin by thanking Mark Urbin for posting this image on his tumblr site: 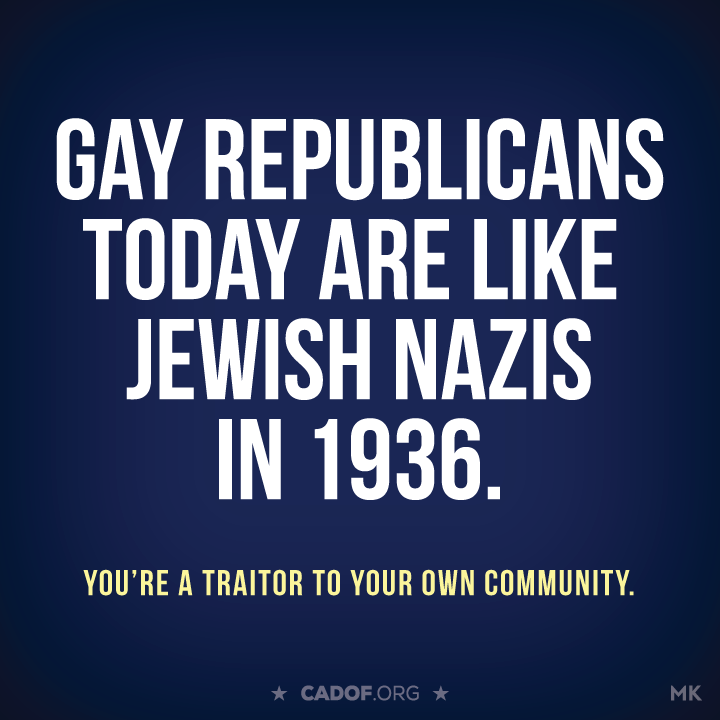 Of course comparing the the Republican party  to the NSDAP is complete nonsense.  Especially as the general doctrine of the Donks is essentially National Socialism without what could be called the Aryan frills.

Central to the depicted nonsense--and in particular the the final line--is the myth of the collective reality.  In collective reality there is only the alleged view of the group and the specific person is denied the right to examine the facts for himself and to reach his own conclusion on the basis of those facts.

And as with all variants of collectivism the person is seen as a thing to be used for the alleged benefit of the collective.  In this case the gay man is denied the right to identify himself as a Citizen of the United States and to rationally cast a ballot as an individual American Citizen.

And of course there is the implicit death penalty for the betrayal of the alleged homosexual collective.  This was the case in history when individuals were executed for race treason under National Socialism and for class treason under Communism.

So what are your questions on this block of instruction?

This is the "progressive" left's reaction to black Americans being elected not as democrats.

They want every member of "their" minorities on the vote plantation. Any deviation must be punished!

Our Dear Leader summed it up nicely in one of his books (or the guy who ghost wrote it):

“A plantation. Black people in the worst jobs. The worst housing. Police brutality rampant. But when the so-called black committeemen came around election time, we’d all line up and vote the straight Democratic ticket. Sell our soul for a Christmas turkey.”