On Tuesday afternoon I saw the third part of the screen adaptation of Atlas Shrugged.  In fact I was not aware that it had been released until I read about it on Dr. Ray's blog.  I went to see it in part because I didn't want to be mentally kicking myself for not doing so.  And because my African-American neighbor in the building I'm stuck in was--as is his utterly mindless habit--blasting his stereo again.

What can I say?

Part Three is a series of scenes from the novel that are linked together with narration.  Given their budget there wasn't an alternative apart from not making the film.  Of course given their budget the producers had to break the rule of show-don't-tell.  Depicting the collapse of the Taggart Bridge simply wasn't possible on their collection of thin dimes.  And--of course-due to the budget the narrative had to be truncated.

And again there was no continuity in the casting, apart from the fellow who played the role of Jeff Allen in Part Two, and his cap.  But for the most part the characterization was to a degree effective.  I must admit that virtually every second that a villain was onscreen I wanted to do a Saigon Special on each and every one of them.

For those readers who don't know what a Saigon Special is: 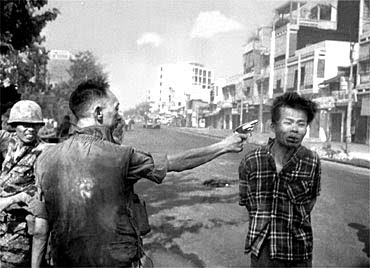 In my opinion a proper cinematic adaptation of Atlas Shrugged would require a multiple year television series.  Such as the with the re-imaged version of Battlestar Galactica.