Rant Of The Day 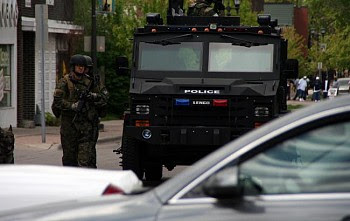 Mike Riggs of Reason.com has the following to say about police misconduct in Saint Paul, Minnesota:

A St. Paul, Minnesota family claims in a lawsuit that police officers who conducted a wrong-door raid on their home shot their dog, and then forced their three handcuffed children to sit near the dead pet while officers ransacked the home. The lawsuit, which names Ramsey County, the Dakota County Drug Task Force, and the DEA, and asks for $30 million in civil rights violations and punitive damages after a wrong-door raid, also claims that the officers kicked the children and deprived one of them of her diabetes medication.

The child went into a diabetic seizure. If the girl had died this would be a clear case of murder.

There are basically two ways to bring this nonsense to an end:

The Totalitarian solution would be to follow the lead of Chairman Mao and arrest and summarily execute anyone anyone who was suspected of being a pusher or a user.

Just dig a few ditches and set up a few machine guns. No need to build camps with those special shower and oven facilities.

The Libertarian solution would be to stop interfering with the evolutionary process by re-legalizing the sale and use of hard drugs and letting the idiots kill themselves.

Of course that wouldn't be progressive, caring, or compassionate.

The Totalitarian solution also has the apparent virtue of allowing the Holy Total State to get rid their open critics without a constitutionally valid legal procedure.

It would not be a surprise under such circumstances to witness my former friend Doug Graen, who is now an open member of the Church of Obamatology, come forth and claim that I used Marijuana back in the late Eighties. This would be no more absurd than "her" claim that because I oppose socialist violence that I'm a totalitarian murderer.

Third option, make the cops accountable for no-knocks to the wrong address.

A buddy of mine in college was Panamanian, and his dad was an officer in the PDF. A pair of PDF soldiers read the house number wrong and did a no-knock raid on his house late one night. They were bright enough to figure out they were in the wrong house when they spotted various PDF certificates and awards on the wall, and got the Hell out quickly.

They spent a few months on one of the nearby islands the Panamanian kept people in need of remedial education. Yes, the beatings did continue until moral improved and the commandant of the "resort" was convinced these two would properly check house numbers before performing a raid.

Yes, that would work.